The original diver's watch was produced by the Slatoustowski Factory in the 1960s and 1970s. The case on these watches is solid stainless steel and is never decorated in any way, there was only a serial number on the caseback. The dial is always plain and never decorated with words, images or symbols.

Original pieces never have a second hand, either sweep or subsidiary, and they never were built with chronograph or even quartz movements.

The dial and hands are NOT radioactive. They do not contain radium.
The Soviet's converted to non-radium lumes by 1960 or so, as early or earlier than many Western watch manufacturers.

History of Russian Dive Watches. What I found fascinating was a goggle search of Russian dive watches pulled up Invicta for the most part. It seems mass production has hijacked history and reality.

This time they have tackled a design they made in 1959 which was commissioned for the Russian Naval Fleet. The former Soviet Union commissioned roughly 100 pieces to be made by Invicta in Switzerland for their elite divers in their Navy, and proved to be one of the last Swiss manufactures used by the USSR. Designed to be worn over a diver's suit this is a huge watch with large numerals and hands for better legibility under water, and in the dark. Protecting the crown is a large screwdown "cap" which tightens down for water resistance. ( this has since somehow become 100 watches for officers )

Eyal Lalo (President & CEO of Invicta Watch) was given one of the original Russian Divers by his grandmother and has decided to use that for a basis for this design. Completely replicating this original took a lot of work by creating this one-off oversized case, and unique vintage dial. The original was carefully taken apart so that every part of it could be inspected, measured, and replicated as closely as possible. Invicta has surpassed the original by utilizing a stronger compound of Tritnite luminescent material on the dial, and a completely reworked and skeletonized Swiss Unitas movement. All of the work was performed in their newly built Swiss factory and it exhibits all of the finish and quality of any high end Swiss Made product.

Excerpts from a reveiw of the original Diver by Ed

The Zlatoust diver's watch is big, really big. I've owned alarm clocks that weren't this big. How big, well its 58mm in diameter (not including the huge canteen crown which brings the overall width to 74mm!), 24mm in thickness (which is thicker than the width of many a ladies watch), the lugs are 24mm wide, lug to lug the watch measures 73mm and the it weighs 10oz. The Zlatoust uses a one piece case design (the movement is installed through the front) with an unusual screw-down bezel to hold the thick acrylic crystal tight against a rubber gasket. The watch ships with a sort of rubberized canvas band (complete with CCCP logo).

In addition to the odd band, the bezel unscrews completely to allow the wearer to remove the protective grill and place a thicker (included) gasket in its place. The lug pins are of a screwed in type and can be removed with the small screwdriver that also came with the watch. The huge canteen style crown screws down and has a rubber gasket to protect the movement from water. An attached chain keeps the crown from getting lost. The numerals and hands on the watch face are luminous and, in a pleasant surprise, the lume is pretty good. The movement on this model is the same one used in the old First State Watch Factory Type One. It is a 15 jewel hand wound mechanism that must be wound once daily by unscrewing and partially removing the canteen crown cover.

The Zlatoust watch factory has an interesting history. During WWII, the one of the Moscow watch factories was evacuated east to Zlatoust in the Chelyabinsk region to avoid being captured or destroyed by the advancing Nazi army. (many other Russian factories were moved this way as well) There, watch and clock production was quickly brought back online. According to the factory, over 90 percent of the clocks installed in Soviet tanks and aircraft were made at Zlatoust. After the war, the factory continued to produce all sorts of clocks and watches including stopwatches and this huge diver watch. (As an aside, they don’t just make watches in Zlatoust. This place was also the center of the old Soviet nuclear weapons industry. See: Zlatoust . It is also reputed to be one of the most contaminated places in the world as well. 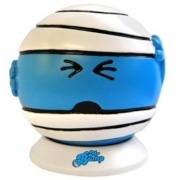 By now, the whole RD/Invicta tale has become both an embarrassment and an opportunity for a quick joke at Eyal's expense .... funny

Except for the true believers.

Was it posted here that on their RD, Invicta intentionally spelled the Russian text incorrectly? Logic was they couldn't be sued for ripping off the design cuz it differed from the original.

This is also a practice for cheap tourist knock-offs sold in Russia. Another tourist watch signature is that grill over the face.

enjoyed the read...thanks for the info