Luck Was a Lady that Night...

Luck Was a Lady that Night...

Sometimes the same Fate that bites you on the backside can turn around and give you all the free pizza you can eat at Petrucelli's - which is great unless you're lactose intolerant, prone to heartburn or gluten intolerance; if you are any or all of these things, go ahead and make up your own damned way-cool thing; I'm keeping my hot pizza wishes and cold Coca-Cola dreams.

Anyhow, Fate did me a nice favor this most recent October when a casual acquaintance of mine, the Audio Visual Guy at one of our clients' offices, was showing me his 1963 Corvette Stingray watch, which was a gift from his granddaughter. (He knew from previous conversations in passing that I was a collector, so it was no surprise to him when I noticed it and then asked to see it.) It was an unusual looking piece, which was what made me take notice in the first place; it looked like a small pewter coin with a raised, three-quarter rear view of a '63 Vette, the only model ever made with the split rear window. He liked the car so much that he was on his second version of the watch, having worn out the first a couple of years ago. (It never occurred to me to ask if he actually owned the car that figured so prominently in his choice of wrist wear, as to do so just didn't seem right, and might, in the end, wind up embarrassing one or both of us.) As it was an unusual, even attractive watch, I complemented him on it, which really seemed to please him.

About a week later, I got word that there was a message for me at the client's front desk, and when I was able to get there, the receptionist handed me a small ziploc bag with what appeared to be a fair number of antique, hand-tooled leather watch straps, all very small but nonetheless well made, inside. A few of them even had what looked like silver buckles and tips, each of them very dark with a patination that made them still more attractive and authentic. Slipped amongst these unique items was what appeared to be a small, vintage style watch. I gently pulled it from the bag, turned it face-up, and this is what I saw: 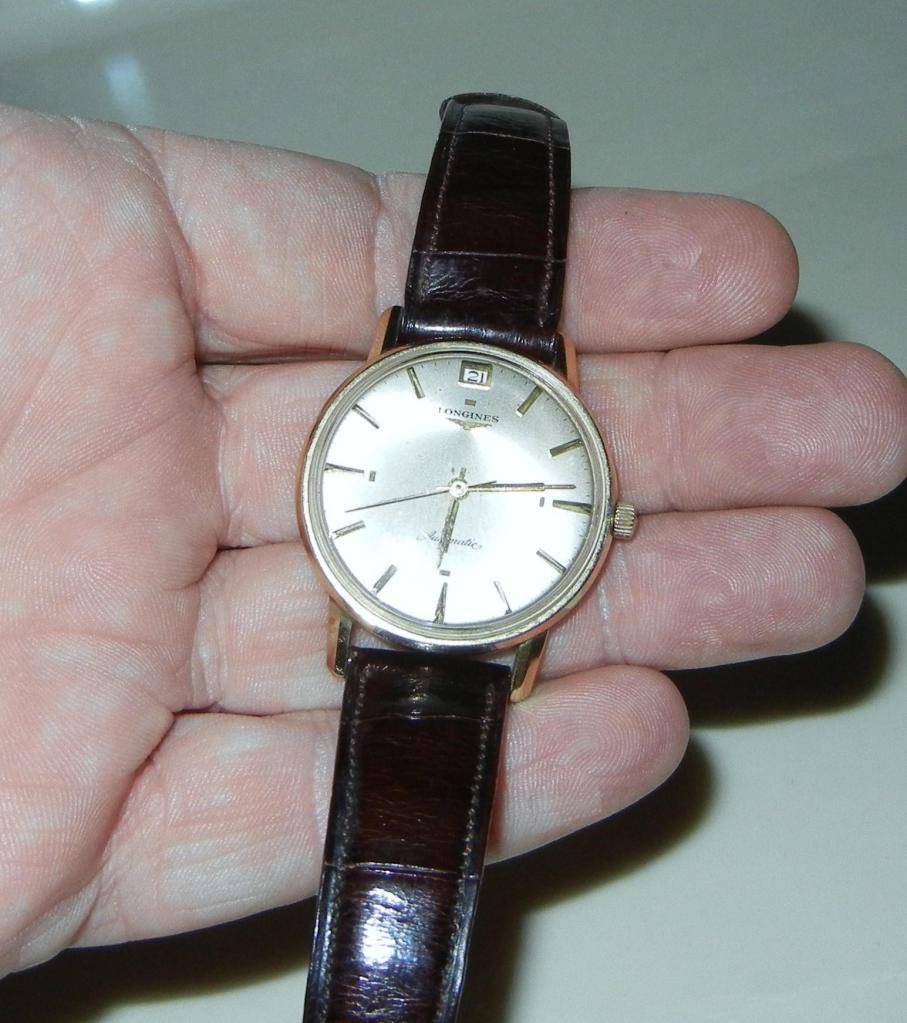 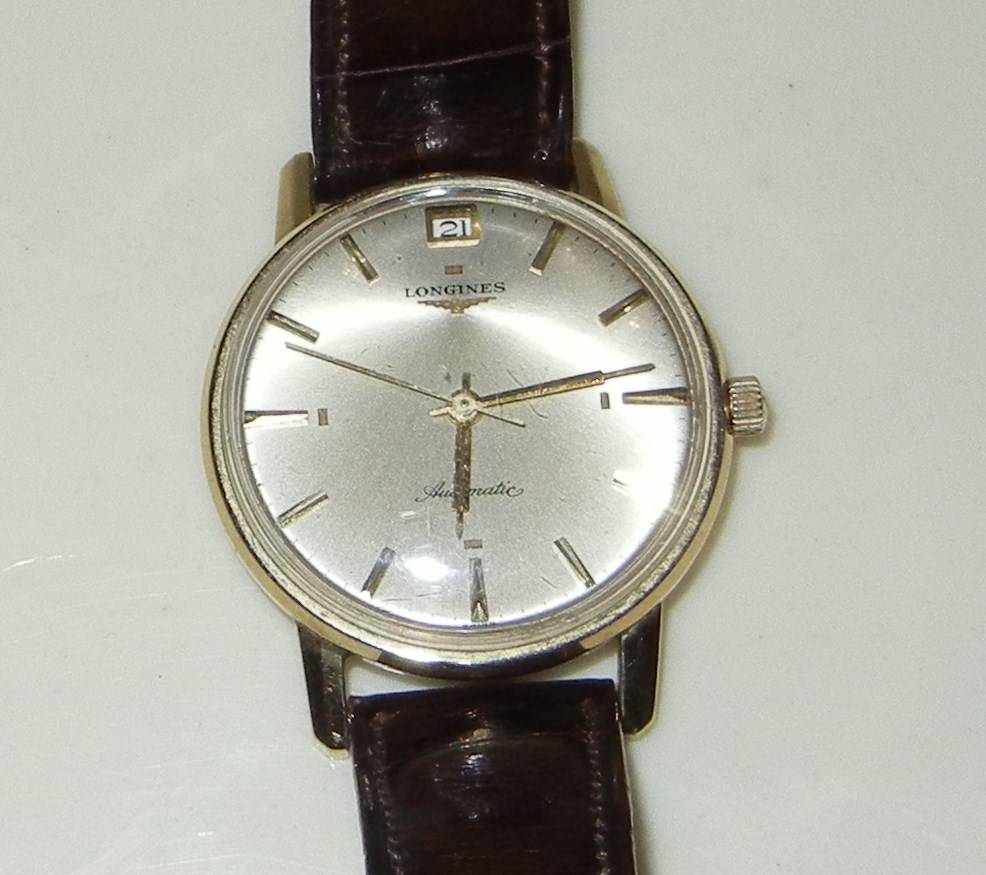 It was only then that I noticed the small piece of yellow paper - the classic 2.5 X 4-inch 'yellow sticky' we've all become so accustomed to over the last 20+ years - neatly folded and almost hidden by the old straps. The note was brief but friendly:

"Dear Mort, these straps were made by my grandad, hope you can use them. The watch was my dad's, but I never wear it, so I thot [sic] you might like it. Am retired as of last week, sorry I missed you. Take care, Stephen."

To say I was flabbergasted would be the understatement of the year, and my first thought was to wonder how I was going to track him down to give him his watch back. I figured that, at the very least, it was a family heirloom, but it was also a Longines family heirloom, and that isn't something you just give away to a casual aquaintance. Ultimately, and long-story-short, I didn't have any luck tracking him down, and I finally elected to keep the watch. I would be lying if I told you that I didn't want it, but having made a very conscientious effort to return it, I was - and remain - comfortable with my decision. 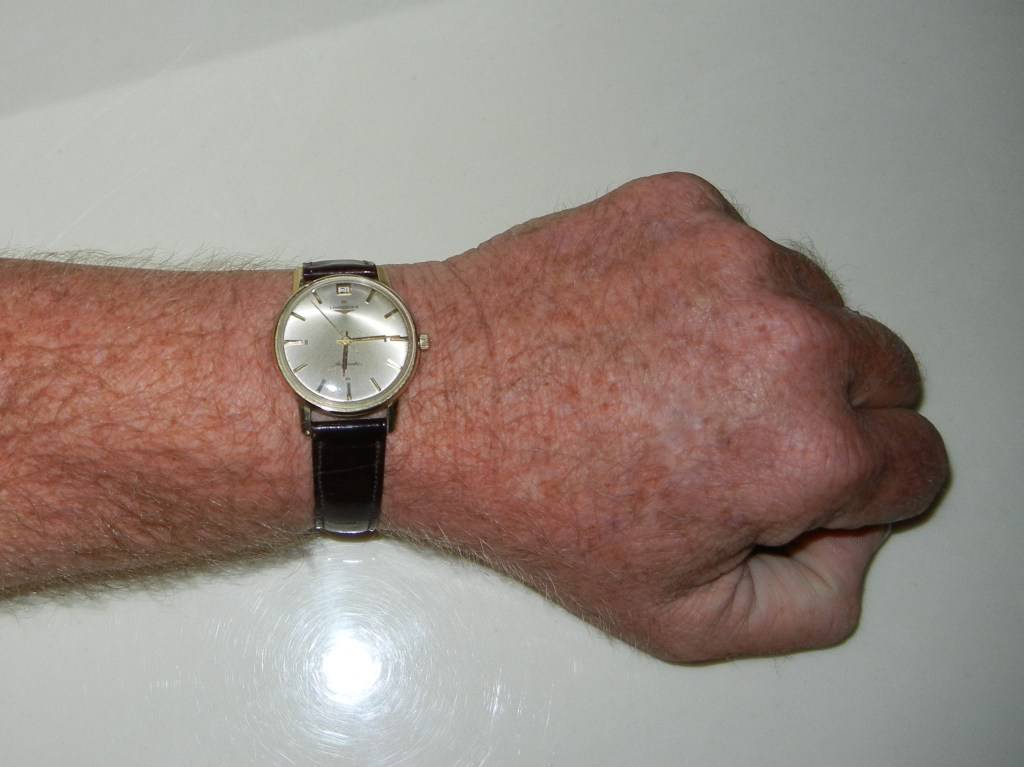 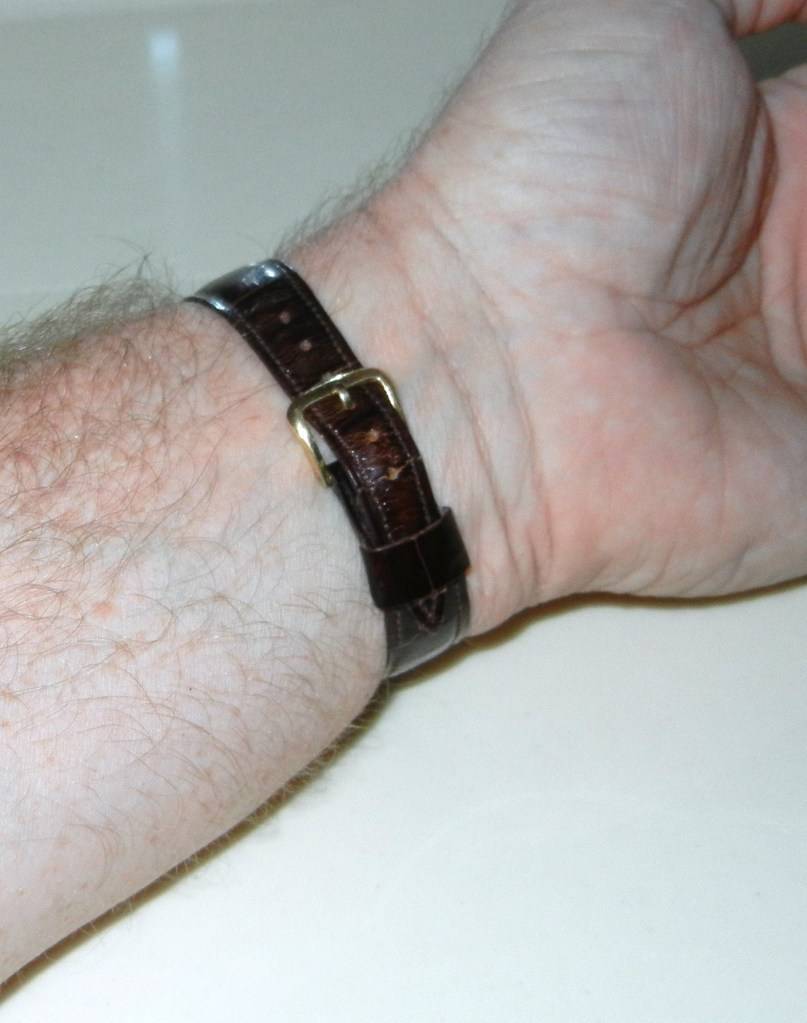 Although there are a few cosmetic issues here and there, its overall condition is very good. There is a bit of wear and tear on the original alligator strap, as can be seen in the above and below pictures, but I have a leathersmith friend who, with the help of a little sinew thread, shouldn't have any trouble repairing and preserving it. Once that's been done, I plan on adding a vintage deployant clasp to help prevent - as much as possible - any further wear and tear on this beautiful old strap. 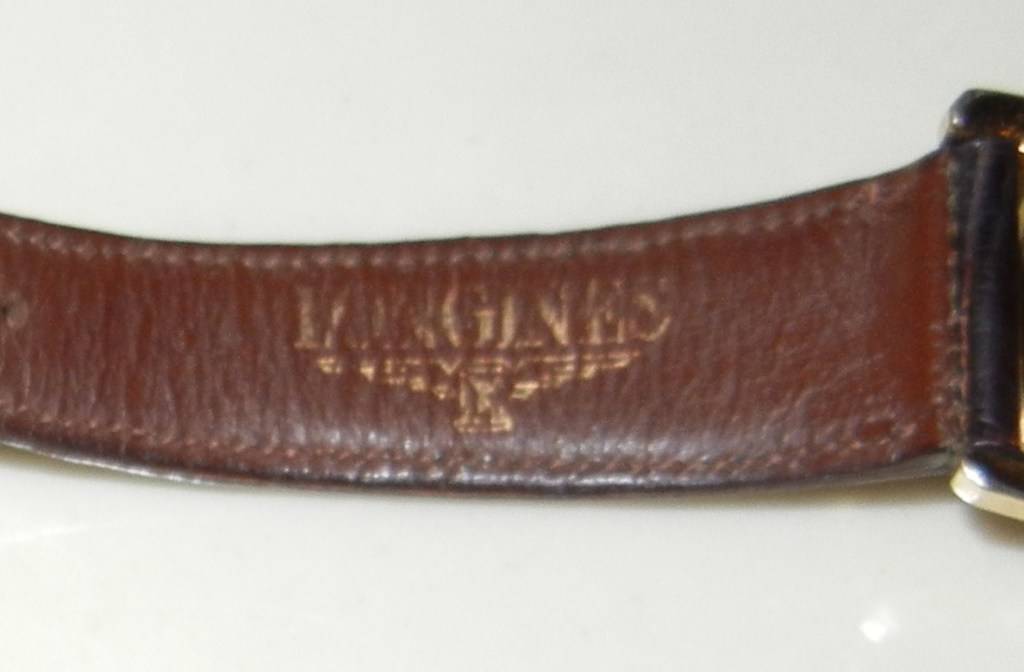 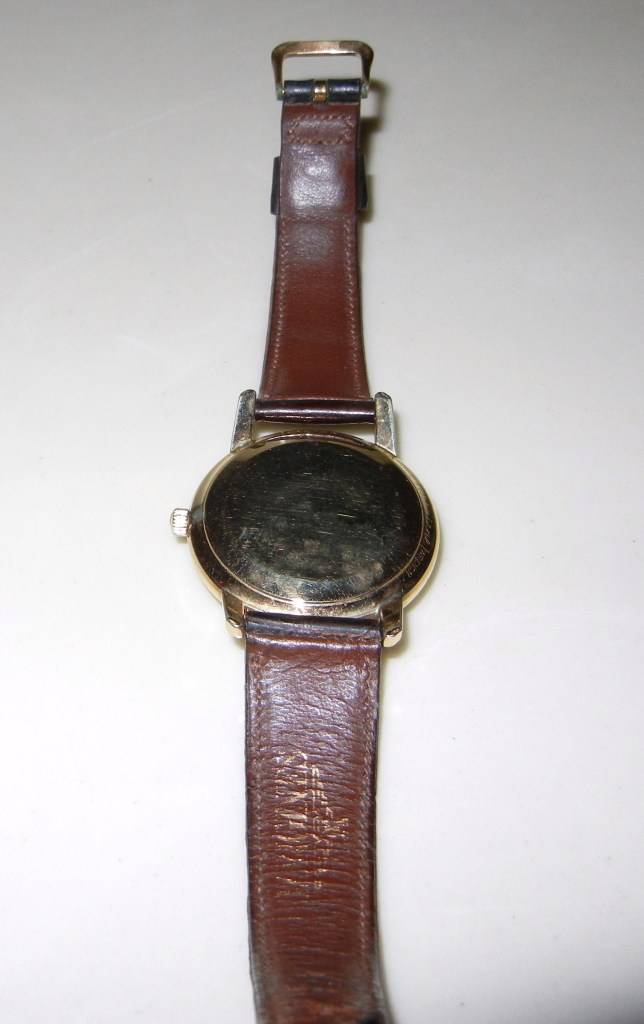 My Watchmaker popped open the back and was able to tell me that the automatic movement is indeed Swiss, as is indicated at the six o'clock position on the dial, as well as original to the watch, though he wasn't able to tell me too much more about it. He did indicate that the 12 o'clock positioning of the date opening was an unusual feature, one that would certainly rule out the possibility of this being some sort of fake. (My friend Doc Needles had said the same thing to me two weeks before when I showed him a picture of this watch shortly after I took possession of it.) In closing, the Watchmaker indicated that the movement had to have received regular servicing as it was in excellent working condition. 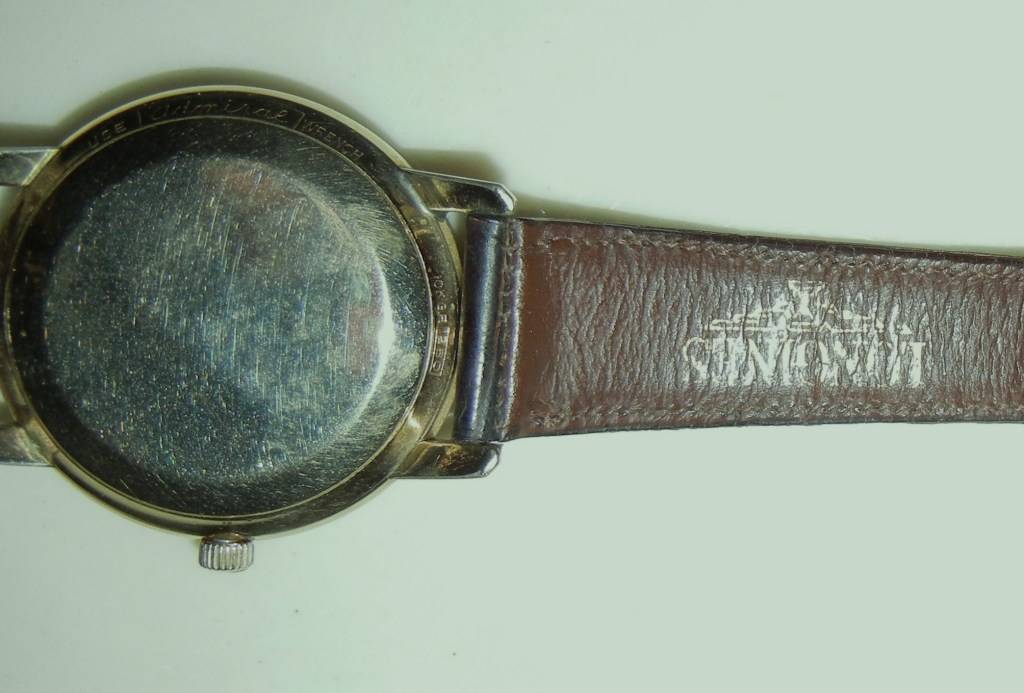 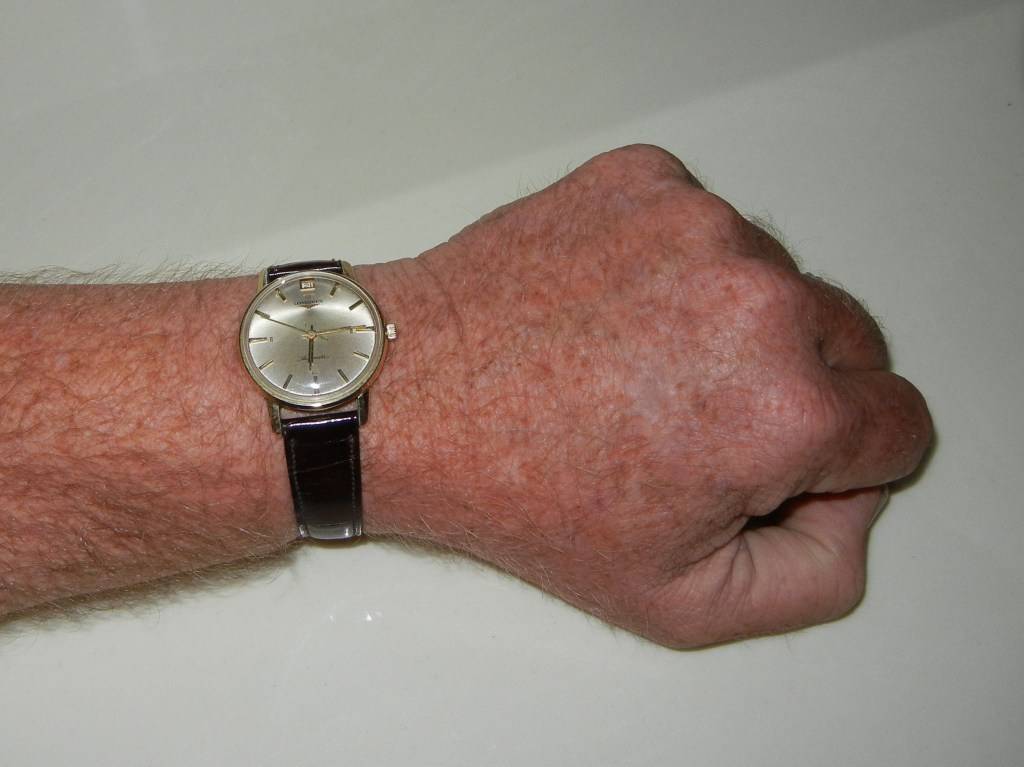 I would be the first to tell you that my level of knowledge when it comes to watches in general, much less vintage watches, is not all that great. (Of course, if you've been reading my posts for any length of time, you already know this..) Nonetheless, I have become more and more enamored of these incredible vintage pieces I've been finding of late, especially this one, the Longines that almost literally 'fell out of the sky.' I am increasingly delighted every time I find myself owning - and learning as much as I can about - an additional vintage watch to add to my collection. Thanks in large part to this beautiful watch coming my way, I've decided to seek out and acquire additional vintage pieces to add to that collection, even as I cull through it, selling off all of those good-Lord-what-was-I-thinking ShopNBC 'masterpieces.'

As always, many thanks for looking, and please accept my apologies for the lousy photo quality; this particular watch proved a difficult one to photograph, and the images above were the best of a pretty bad lot. c'est le mort...

I read this review when you originally posted it. It was my pleasure then and now.............well done

Thank you, sir! Your opinion is always sought, and always welcome...Have a great weekend, Eduardo!

bigedsurf wrote:I read this review when you originally posted it. It was my pleasure then and now.............well done